Salisbury — Rufty’s Garden Shop has been in Salisbury since 1957. For 65 years, Rufty’s has been one of his favorite local destinations for those looking to get their hands dirty with a variety of botanicals. Owner Charlie Smith decided to sell the store.

Smith was born and raised in Salisbury and was raised in the Lufti family, the shop’s original owners.

“They were such nice people. I can’t say enough good things about them,” Smith said.

Smith originally wanted to be a forest ranger, but after learning that it would take four to five years to get a job, he switched his interests to gardening. In the early 1980s, Smith moved back to Salisbury and eventually got a job at Lufty’s, where he has remained since buying the store in the 1990s.

“I started by loading the truck. Just like the grocery store bagboy ends up buying the store one day. It was just that kind of scenario, the storybook.”

When Smith started running Lufty’s, he started doing things his own way to keep up with botanical innovation and what people wanted.

“We did something a little different in the early days. Lufti was into growing old-fashioned plants, like metal food pots and metal food containers. We’ve started a new method, we’ve grown some things in nursery containers, and I think it’s made a difference. We were ready to accept the product,” Smith explained.

Smith initially had a plant nursery at home, but after the deer became familiar with his plants, he began growing them all on the property. Always on the lookout for new materials, Smith buys local plants, with the exception of specimens such as topiary and bonsai, which he obtains from the West Coast.

“I have gardening experience, so I was knowledgeable. When people came in and they had an insect or disease problem, we were able to diagnose and prescribe products to fix them. They came here when they wanted to know something, they wanted to know it right,” Smith said.

Rufty’s has survived through the years and changes in the market because plants and gardening are such a broad and fulfilling activity to participate in.

“Even in the recession, garden stores were doing well because people were staying home and doing staycations, before that was a term. We will invest hundreds of dollars in our garden,” Smith said.

People are disappointed to hear that Rufty’s is closing, but Smith wants to spend time with his family. His first grandchild is due in February. He’s still waiting for a buyer, but he hopes that whoever takes over next will continue what made Lufty exist for so long in the first place.

“I would love to see someone come, get it, and run it as a garden shop. It was so popular that after 65 years in business it would be a shame to let it go,” Smith admitted. 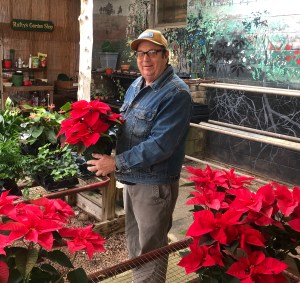 Charles Smith tends some of his Christmas poinsettia plants. 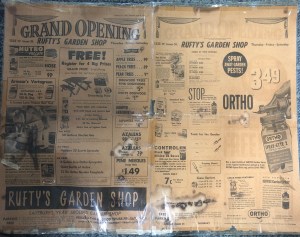 This 1960 ad for The Salisbury Post tells the story of Rufty’s grand opening. 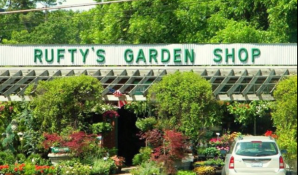