Longtime UAMS friend and benefactor Larry Crane Sr. also pledged $1 million to the Cancer Institute in memory of his late wife, who died in 2018 after a battle with cancer. It was recognized and awarded at the ceremony. Other members of the Crane family, including his children and grandchildren, joined him in the Dec. 8 ceremony.

Seeds of Hope is a sculpture by Little Rock artist Michael Warwick, carved from 3,700 pounds of Turkish marble. This sculpture is a symbol of hope and healing for cancer institute patients. A small garden in the lobby of the Cancer Institute surrounds the sculpture.

Traditionally in cancer research institutes, two seed-shaped tokens are presented on the last day of a patient’s active treatment. Or give it to someone else as your own symbol of hope. The Janet Crane Seed of Hope Garden is one of her most-visited areas at the Cancer Institute, with a celebration every time another patient places her token in the sculpture.

Larry Crane’s donation provides an important resource for the Cancer Institute to pursue National Cancer Institute (NCI) designation. This is a highly competitive evaluation process in which cancer centers must demonstrate outstanding depth and breadth of quality cancer research. 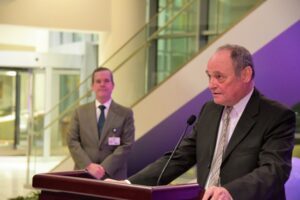 “The process required for NCI designation is very challenging, but critical for cancer patients in Arkansas. You don’t have to leave the state for years,” said Michael Birrer, MD, Ph.D., Vice President and Director of the UAMS Cancer Institute. “In order to meet this designation, flexibility in charitable donations is critical, allowing us to improve different areas of the Cancer Institute. I am very grateful to Crains for his generosity.”

Crain is president of Crain Management Group LLC. Crain Management Group LLC is a majority-owned holding company in a diverse group of companies. He earned his degree in accounting from the University of Arkansas in Fayetteville in 1963, and in 1966 he joined his Crain Automotive, Inc., a general merchandise and auto parts business started by his father, Paul Crane. I joined the company. The company has since acquired other auto parts distribution businesses and expanded to 16 locations. In 1991, it expanded to include car dealers. 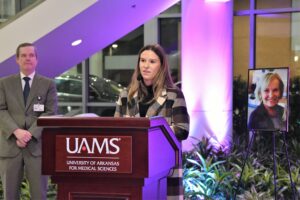 Larry and Janet Crane were high school sweethearts and married while attending the University of Arkansas in Fayetteville. Over the decades, Janet Crane has served as a much loved and respected mother to the Crane Automotive team. She was a school teacher and was an active volunteer in her children’s schools and community. Affectionately referred to by her nine grandchildren and her four great-grandchildren, “Grundy” continues to live on as her mother and community volunteer.

“Grundy was magical. The environment with her was like a dream,” said granddaughter Camryn Crane. “She was one of the most optimistic people I know. She always chose to see through the dark, she always saw the light.”